After some 5 years of lobbying by residents and the Grove Park Group, lighting has finally been installed on the Deans Close / Ernest Gardens railway footbridge. The lack of illumination on the footbridge over the railway, allowing connecting Strand on the Green commuters to connect with Gunnersbury Station, has been a longstanding source of anxiety for pedestrians on dark evenings.

On 24th October 2015, prompted by local residents, there was a site meeting on the Deans Close Bridge, attended by Ruth Cadbury MP, local Councillors, residents and the GPG. The GPG followed up the issue with Ruth Cadbury, but she had to retire hurt from unproductive negotiations with Network Rail, who own the land on which the bridge is built, but who stated that lights were not their responsibility. The matter was apparently only settled when Steve Curran , Leader of Hounslow Council, said that Hounslow would pay for the lights, and, after some public reminders from the GPG, the Council’s Transport, Parking & Environmental Strategy Dept. were finally able to install the lights on 21st September, with them becoming operational on Thursday 24 Sept.

The October 2019 consultation on the South Chiswick Liveable Neighbourhood also provoked the following summation, following many residents’ comments:
‘The Deans Lane footbridge was one of the hotspot locations, with a high level of shared concern over poor personal safety due to lack of lighting and poor maintenance. The council has been working on a new lighting scheme at the bridge which is due to be installed this summer. Further consideration will be given to improving the access to the bridge once this scheme is completed.’

The GPG will continue to monitor the bridge, which is in rather poor condition, and liaise with the council re: ongoing works. 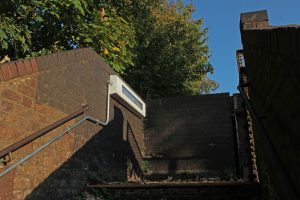