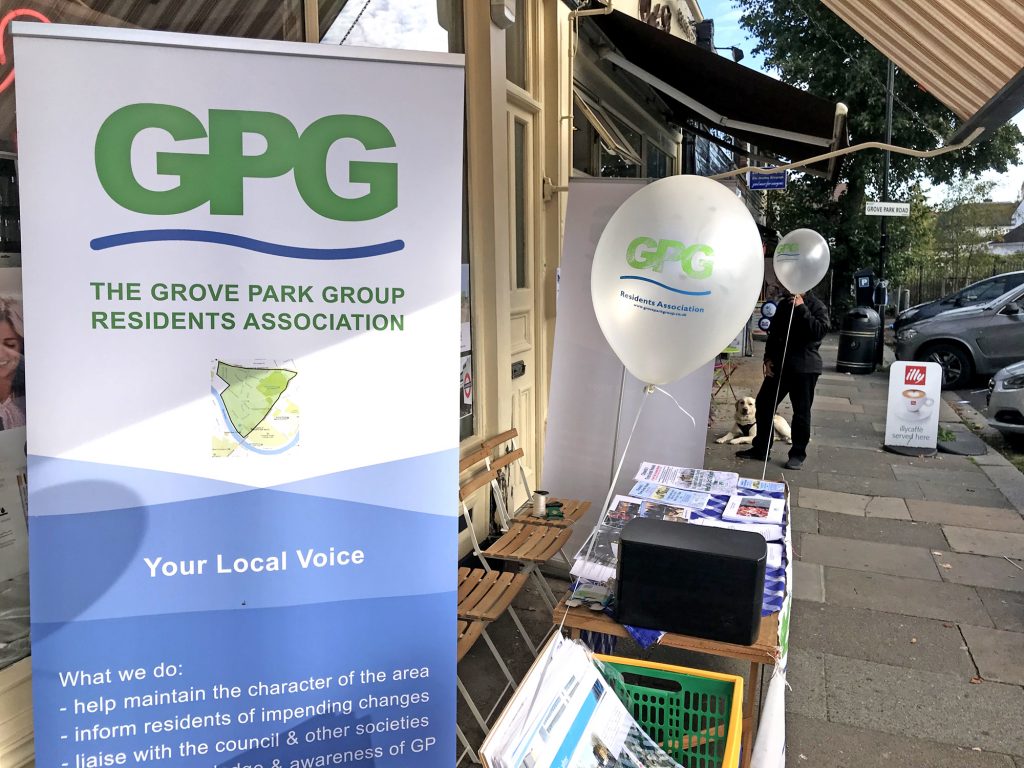 Representing The Residents Of Grove Park Since 1970

The Grove Park Group is a Residents’ Association, formed in 1970, concerned with issues that affect residents and businesses in the Grove Park area. Our patch is roughly bounded by the A4 to the north, the A316 to the east, the river to the south, and the District Line to the east, although we only reach the western end of Grove Park Road, before Strand on the Green begins.

The GPG was at a low ebb in 2011, with few members, but its fortunes were transformed with a new Committee, and since then membership has increased and our profile raised.

We attend local meetings, including the local Ward Crime Panel, the Chiswick Area Forum (when it is re-instituted), the Gunnersbury Station Action Team meetings, and are regularly asked to Chair local meetings because of our resolutely apolitical stance.

We liaise with local Councillors and are part of a wider organisation of Residents’ Associations across the borough (the ‘G15+’), who interact with the Council Lead Members plus Council Officers on topics of wider significance, such as Planning, Conservation, Traffic and Highways policy and Citizen Engagement. Together with the G15+, the GPG spent much time on helping the Council formulate its 15-year ‘Local Plan’, as well as its forward-looking ideas for regenerating the A4, particularly from Syon Lane to Gunnersbury Station.

We also present occasional free talks on aspects of local history – our most recent two were over-subscribed, so be sure to book early.

There is a committee of 7, including Chair, Vice-Chair, Secretary, Treasurer and Membership Secretary; all are local residents and they meet once a month. There is an Annual General Meeting (likely to be Virtual in 2020), to which all members are welcome, and a Quarterly Newsletter for information.

Numbers speak for themselves

The area of Grove Park in Chiswick has a rich history.

Ice Age Flint axes have been found at various sites in Chiswick, dating back to the Ice Age.

Iron Age (650 BC – 43 AD) Tools and pottery found on Chiswick Eyot suggest an Iron Age settlement on the island. Skulls were dredged up at Strand on the Green from river burials, believed to be offerings to the Iron Age gods.

Roman (100 – 410 AD) The Romans arrived, and of course built roads, two through Chiswick, probably from Turnham Green down to the river.

Saxon (600-1066) There is less evidence of Saxon settlements, but they did give Chiswick its name, a Saxon word meaning ‘cheese farm’. Meanwhile the land was being cultivated for general farming, with the barley being apparently ‘exceptionally fine’ – hence the later breweries, orchards, nursery gardens, trees and hedging to supply the formal gardens of landowners. Osiers were grown along the river bank for making baskets, while down by the river was a fishing hamlet.

1181 The first recorded settlement in Grove Park was Little Sutton, one of two manors in Chiswick. A hamlet had grown up around Sutton Manor, a large farming estate belonging to the Dean and Chapter of St Paul’s.

1396 King Richard II had a house built in the manor, on the site of what is now the corner of Sutton Court Road and Fauconberg Road, which became home to Lord Fauconberg and his wife Mary (the third daughter of Oliver Cromwell). The house was finally demolished in 1905, and a large block of flats built in its grounds. Wealthy landowners began eyeing up the land in this desirable area for their mansion houses.

1412 Grove House is first mentioned in a record of its sale to Mr Thomas Holgill, as a large house with extensive grounds, covering most of what is known as Grove Park, and sited at what is now the west end of Kinnaird Avenue. Its gardens were to be described as ‘the finest in England’.

1540 The Barker family moved into Grove House and stayed for 200 years, and co-incidentally today there is a Barker family living in almost exactly the same spot (probably no relation).

1611 Up in the Eastern corner there was a bit of building work going on: Chiswick House – the timber Jacobean version. In 1682 it was bought by the First Earl of Burlington, though demolished in 1788.

1725-9 Chiswick House was inherited by the Third Earl of Burlington, ‘the architect Earl’, who designed and built the Palladian Chiswick House next door to the timber Jacobean version, probably to house his collection of paintings, sculptures and furniture, his library and his offices. On his death in 1753, the Dukes of Devonshire became the owner, by virtue of the Fourth Duke’s marriage to Burlington’s daughter.

1747 The Barkers finally moved out of Grove House, and the Grove estate was sold to the Earl of Grantham, who enjoyed over 80 acres of formal gardens, orchards, an orangery, stables and a lake close to the river bank. In his will, Grove House was left to his daughter and her husband, Lord Heathfield. On his demise, the next occupants were Humphry Morice, son of the Governor of the Bank of England, then Mrs Luther, the Rev. Robert Louth.

1861 In 1861 Grove House came into the hands of the Duke of Devonshire. By the mid 19th century the Dukes of Devonshire owned more than half of Chiswick, having steadily acquired the main estates over the previous 100 years.

1867 Back at Grove House, the Duke was carrying out extensive alterations, but also developing the land on the estate. The Grove Park Hotel (now The Old Station House pub) was believed to be the first building on the site, to cater for visitors to the area for river sports, and marks the start of modern day Grove Park. 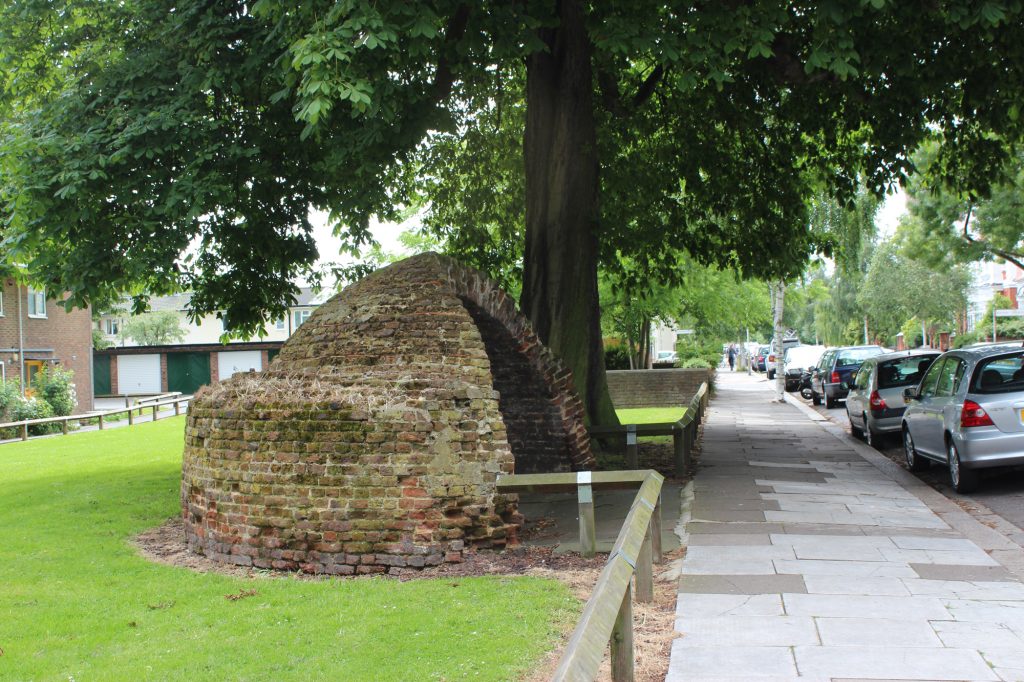 1871 The Duke of Devonshire started developing the land of the Grove Park estate as a high-class residential area for wealthy merchants. The earliest housing is said to be on the river side of Grove Park Road, where large Victorian villas were erected, and it soon extended to Hartington Road.

1872 St Paul’s Church was built, with the help of a large donation from the Duke.
Late 1870s saw the establishment of the ’Grove Park Society’.

1928 Col. Shipway lived at Grove House until he died in 1928, when the house was demolished. It is rumoured that it was taken down brick by brick, each brick numbered, and shipped to the United States, where it was rebuilt.

Early 1920s The Duke of Devonshire started selling off his land: Duke’s Meadows, Chiswick House, and the Grove estate, which was acquired by the Kinnaird Park Estate Company. Architects and builders moved into the area, and houses and flats, such as the art deco Hartington Court, shot up until the outbreak of World War II.

Post War – Present
A time of austerity restricted further development until about 1956 when ‘Thames Village’ was built. The early to mid 1960s saw the erection of the more modern houses of Chiswick Staithe, and in 1971 building started at Chiswick Quay. Despite blocks of flats seemingly squeezed into almost every available space since then, we still have our open spaces in Hartington Road and Chiswick House, plus the wide avenues and chestnut trees, to remind us of Grove Park’s verdant horticultural past.